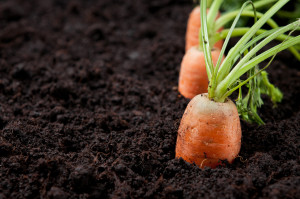 As you read this, our country’s president is meeting with 150 global influencers at a United Nations summit on climate change, making the issue of the climate change and organic farming’s role in the solution especially relevant.

We’re all familiar with the climate change situation and how it negatively affects our agriculture production. But did you know about the instrumental role organic farming could play in its solution? Your health and livelihood depend on it, and that has us paying close attention to this agricultural all-star often chalked up to nothing more than a healthier- more expensive– produce option in the grocery store.

Sure, organic farming sounds great. But to really drive this idea home let’s look to the very ground beneath us. Humans, meet the soil that has sustained us for centuries.

In 2010, an underwhelming 11 percent of the global land surface was deemed Class I, II, and III land, explained an Organic Processing Magazine article. And riding on that 11 percent is the 7.6 billion people expended to populate the earth by 2020. More people and less available land for agriculture promises to present serious problems left unaddressed in the immediate future.

The Root of the Problem

So why is only 11 percent of the global land surface suitable for quality agriculture production? Desertification, which accounts for the continued degradation of dryland ecosystems, is one of the biggest threats to what are already some of the most impoverished, underdeveloped areas around the world.

This phenomenon comes as a double-edged sword that draws a direct correlation between human activities like intensive farming and climate change and desertification, while giving us comfort knowing that with the right course of action, we can change this outcome.

The Key to the Future

When the Kyoto Protocol was first initiated by the United Nations in 1997, world leaders began exploring solutions for the global climate crisis. At the time it came as no surprise that farming was excluded from the pool of viable options.

“According to the U.S. Government, conventional, chemical-based agriculture contributes to nearly 20 percent of the nation’s carbon dioxide emissions,” reported Organic Processing Magazine in the same 2010 article.

The problem with this perspective is that it didn’t account for other, more restorative organic farming practices.

Unlike like chemical-based farming, which leaves soil depleted of organic matter, organic farming places an emphasis on building and maintaining organic matter. Replenishing the organic matter needed for good agriculture production is contingent on our ability to rebuild the soil’s carbon-storing properties. The more soil carbon that is stored, the less it is released into the environment as carbon dioxide, a common greenhouse gas. While some carbon dioxide in the air is a natural occurrence, too much can cause climate changes that throw off the balance of healthy soil and sometimes cause desertification.

The Methods Make the Difference

Replenishing and maintaining healthy soil carbon levels isn’t black and white; it’s a very complicated issue. In spite of this, there are some organic farming methods we know work.

“The most effective methods are animal manure fertilization, planting cover crops, planting grass and clover into the rotations as feedstuff for livestock and diversifying the crop sequences, as well as reducing plowing depth and frequency (no-till or min-till),” notes Organic Processing Magazine.

Refocusing our efforts on maintaining the soil carbon-carbon dioxide balance through the right organic farming methods is crucial to our future on earth.

Ask your community for more organic farming; it makes the world of difference.